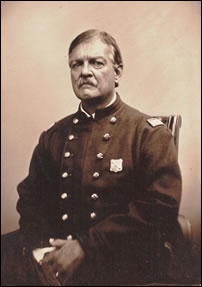 The meeting will be held at the Oley Fair Centre Building, 26 Jefferson Street, Oley

Some of Major General Hartranft’s accomplishments include:

Mark Grim is a retired Colonel, US Marine Corps, with over 25 years of service and also a retired Pa. attorney. He is descended from a Civil War veteran, Corporal Andrew Grim.